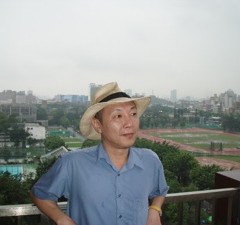 Parameters of the Universe through Sunyaev-Zeldovich Effect Cluster Counts”, ApJ,

universe accelerated by a cosmological constant and by quintessence”, PRD, 65, 3518

Tzihong Chiueh was born in Hsi-Tser (汐止), Taipei County, Nov. 29, 1955.  He obtained BS/Physics, MS/Physics and PhD/Physics in 1978, 1980 and 1985 from NTU, UCLA and UT Austin, respectively.  During 1985 to 1989, he worked as a postdoc fellow in University of Colorado in Boulder.  In 1989, he joined Physics Department, National Central University as a faculty member, and in 1992 he became a faculty member of the then newly formed Institute of Astronomy, National Central University, also serving as the Director.  Since 1998, he joined Physics Department NTU as a faculty member.  He also holds a joint appointment with Academia Sinica Institute of Astronomy and Astrophysics (ASIAA) ever since 1993.  In 1997-1999, he serves in National Science Council as the Co-Chairman of the Physics Research Review Committee.

Tzihong Chiueh’s research interests include Theoretical Astrophysics, Computational Astrophysics and Astrophysics instrumentations.  He was awarded with the Outstanding Research Awards of National Science Council in 1991, 1994 and 2003, and was appointed as the NTU Distinguished Professor since 2007.