Gamma-ray bursts (GRB) are the most violent release of energy in the whole universe second only to the Big Bang itself. Of the order 1050 erg/sec of energy is released at the GRB site. Such explosions last for a very brief time, however. Observations show two types of GRBs, differentiated by the duration of the prompt signals. Namely, there are the short-burst GRB events that last for 1-2 seconds and the long-burst ones that last for longer than 2 seconds but typically about 10s of seconds. About 1/3 of GRBs are short-bursts and 2/3 long-bursts.

The origin and nature of GRBs are not yet determined. Experts believe that the long bursts are triggered by hypernova, the gravitational collapse and explosion of a very massive star. As for the short bursts, a popular theory is that they are induced by the coalescence of binary compact objects such as neutron stars and black holes. Being much brighter than supernovae, GRBs can be observed at much farther distance. The most distant GRB observed is GRB090429B at a redshift of z=9.4, near the edge of the universe.

Supernova Type-Ia (SN-Ia) are standard candles allowing precision measurement of cosmic distances, which led to discovery of the accelerating expansion of the universe. It is hoped that a sub-type of GRB can be identified as a new standard candle so that the measurement of the expansion rate can be pushed further back in time. This desire can only be accomplished through detailed investigations of GRB prompt signals. LeCosPA is a member of an international collaboration developing a new satellite GRB telescope UFFO, which aims at shorten this time delay to about 1 second. A prototype of this concept, UFFO-Pathfinder on board the Moscow State University’s Lomonosov satellite, was launched on Apr 28, 2016 from Vostochny cosmodrome in Russian Federation using the Soyuz 2.1a rocket to the low Earth polar orbit. The UFFO-Pathfinder consists of two scientific instruments. Firstly the location of a GRB is determined by the UFFO Burst Alert & Trigger telescope (UBAT) employing the coded-mask technique and the detector compound of YSO scintillating crystals and multi-anode photomultiplier tubes. Secondly the Slewing Mirror Telescope (SMT) redirects the optical path to its intensified CCD detector capable of counting single photons in order to provide the prompt optical observation of a GRB. 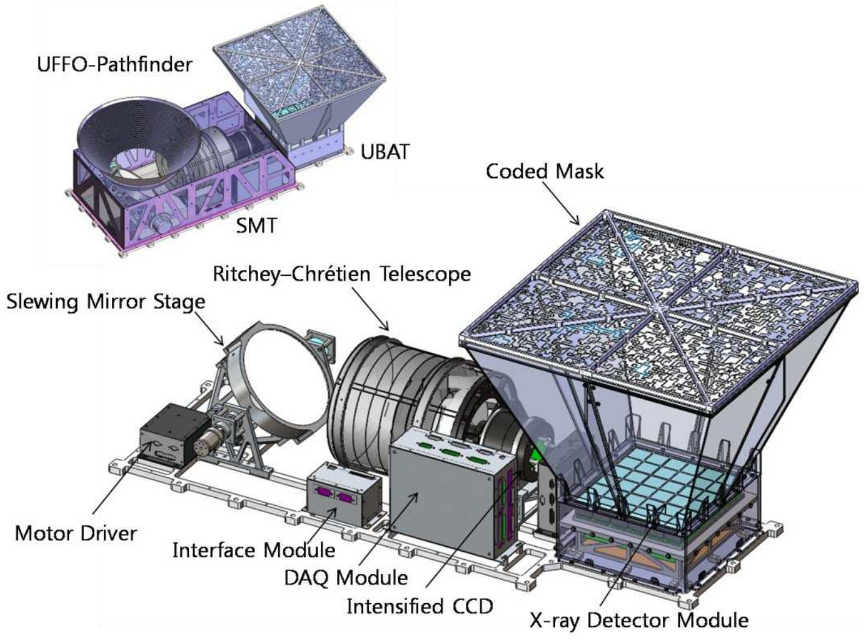