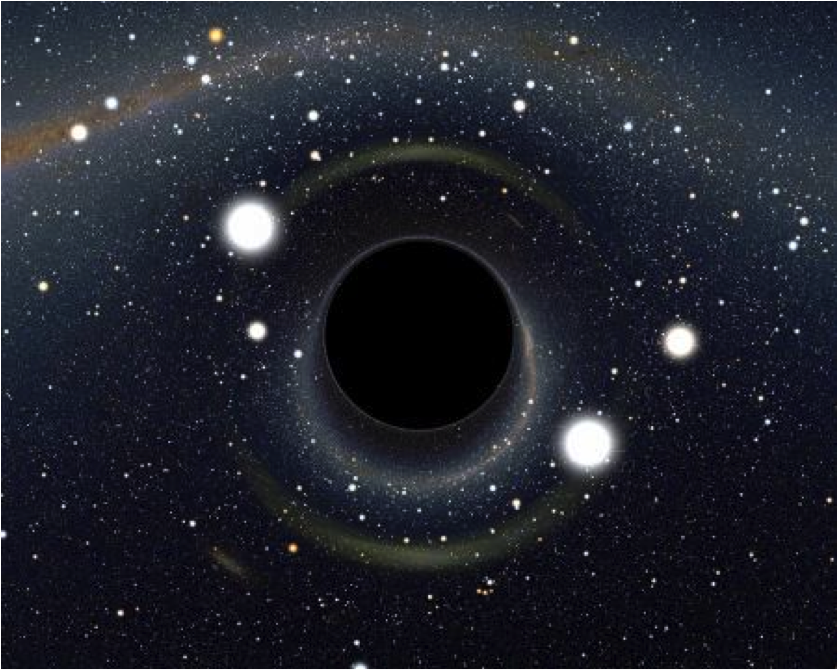 A black hole is a region of spacetime having such tremendous gravity that no object, including light. The boundary of the black hole at which no light can escape is called the event horizon. Although light cannot escape from a black hole, its existence can be inferred by light passing by it or stars revolving around it. Black holes can also accrete dust from its surroundings, creating a hot disk at its equator as well as high energy jets at its poles, giving rise to one of the brightest objects in the universe. Observations imply the existence of stellar-size and supermassive black holes, as close as in our own galaxy. The stellar-mass black holes result from gravitational collapse after massive stars have burned all of their nuclear fuel. Supermassive black holes are millions times more massive than the sun and believed to exist at the center of almost every galaxy. The supermassive black hole at the center of Milky Way has a mass about 4.3 million solar masses.

Studying quantum effects near a black hole, Stephen Hawking discovered in 1975 that a black holes is not entirely black, but radiates at a temperature inversely proportional to its mass. This suggests that the black hole loses mass over the course of its life, and eventually shrinks until quantum gravity becomes important. No one knows whether it will6 end its life with an explosion. Some argue that, based on the generalized uncertainty principle, black hole evaporation would come to a stop when its mass and size approach the Planck scale, and leave behind a black hole remnant. In this case, primordial black holes, formed by spacetime fluctuations in the very early universe, could be still another a dark matter candidate.

Black hole temperature implies another problem: what happens to the information that falls into a black hole? Does it disappear when the black hole evaporates? Quantum physics demands that information is never lost in any physical process, which appears to contradict these classical deductions. Black holes are thus at the forefront of the question how to unify quantum mechanics and general relativity, or at least made them peacefully coexistent.